Vincent van Gogh’s famous Sunflower paintings are known across the globe. But not everybody knows the great Dutch artist produced more versions of the same subject. The first series Van Gogh painted in Paris (1887) shows sunflowers placed on the ground. The second series, painted in the south of France (Arles, 1888-1889), consists of the famous sunflowers in a vase. Five can be found in museums in Amsterdam, London, Munich, Philadelphia and Tokyo.

Vincent painted them with three shades of yellow ‘and nothing else’, to demonstrate it was possible to use variations of one colour without losing power of expression. The master made more versions: one with a turquoise background, said to be in a private American collection. The other, with a royal blue background, was lost in a fire in Japan during Second World War bombing.

Van Gogh (1853-1890) started painting flower still lifes to experiment with colour. His earlier Dutch period was characterized by use of dark colour and heavy forms, peasants and their lives (The Potato Eaters, 1885). In Paris the artist saw the fresh colours chosen by the Impressionists, inspiring him to use more colour in his own work. After adopting Impressionist techniques and investigating pointillism (Seurat), he painted Paris scenes, portraits and flowers. Contemporaries painted flowers too, but not the coarser sunflowers Vincent liked for their size, shape and structure. He would choose them as a principal subject, and they became the very symbol of his great art. When he was buried in Auvers-sur-Oise, northwest of Paris, friends brought sunflowers: they had become synonymous with Vincent van Gogh’s work.

‘The sunflower is mine’

Vincent painted his first still lifes of sunflowers in Paris. Learning the painter Paul Gauguin liked them, Vincent felt encouraged to continue. He had recently met Gauguin and admired his work. Gauguin appreciating his own art convinced Van Gogh he was on the right track. Not much later he moved to the south of France, thinking of establishing an artist colony. In Arles he painted landscapes and portraits, vivid, full of colour, emotion and light.

When Paul Gauguin decided to visit, Vincent painted various still lifes of sun flowers to decorate the guest room in his yellow house. He wrote to his sister about this imminent visit, and his intention to decorate the whole studio with sunflowers. Vincentvangogh.org points out: ‘Though originally made for Gauguin, Van Gogh later took the sunflower as his own personal artistic signature, telling his brother Theo in another letter in 1889 that "the sunflower is mine."’ Gauguin, whose art influenced his Dutch host, said the paintings were ‘completely Vincent’. During his stay in the yellow house, Gauguin painted Vincent at work and titled the canvas ‘The Painter of Sunflowers’.

What the sunflowers stood for is explained by the Van Gogh Museum in Amsterdam: ‘The ‘Sunflowers’ were meant to symbolise gratitude. Vincent wanted to combine two versions of the Sunflowers with Woman Rocking the Cradle, the portrait that he made as an homage to the comforting mother figure. Together, the paintings were to form a triptych. The two Sunflowers were the ‘yellow panels’ that would intensify the colours of the portrait. Vincent thought that the triptych as a whole symbolised gratitude’. 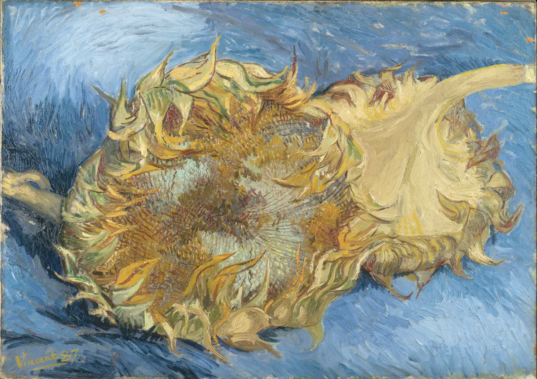 The artist painted several sunflower canvases at the same time. In Van Gogh’s series of sunflowers the differences are not big: the lay out and positioning of the flowers are similar. However, the number of flowers vary and the moment in their blooming. And the background colours vary. In recent years state of the art research has shown colours had been changed. Initially brighter yellows were used, and other colours. Some colours have faded with time. There are several theories about Van Gogh’s prolific use of yellow. It is said consuming too much absinthe, or the use of digitalis, may have caused him to see yellow more intently.

Most Sunflower versions were painted on ‘size 30’ canvases. This was a French standard size for oil paintings, fixed in the 19th century for figure painting, landscapes and marines. It is thought Vincent added a wooden strip to the top of a Sunflower canvas because there was not enough space for one of the flowers.

Fingerprints have been found on the edge of a sunflower painting. The artist must have picked up the canvas before the paint had dried. Vincent van Gogh applied paint thickly, often straight from the tube.

In London, in the National Gallery, one of the original sunflower paintings was targeted last autumn by environmental activists from the Just Stop Oil campaign. They threw tomato soup at it before gluing their hands to the wall. The canvas, covered with plexiglass, was not damaged, but the frame was. The painting was put back on display the same day.

Vincent’s sunflowers are included in the Van Gogh Exhibition, the ‘Immersive Experience’ touring the world now for five years, and already seen by 5 million visitors: https://vangoghexpo.com. The work of the Dutch master on huge screens, with virtual reality and with 360-degree projections: stepping into Van Gogh’s paintings, the sunflowers growing around you. Spectacular - but Van Gogh’s original art of course remains mind blowing.