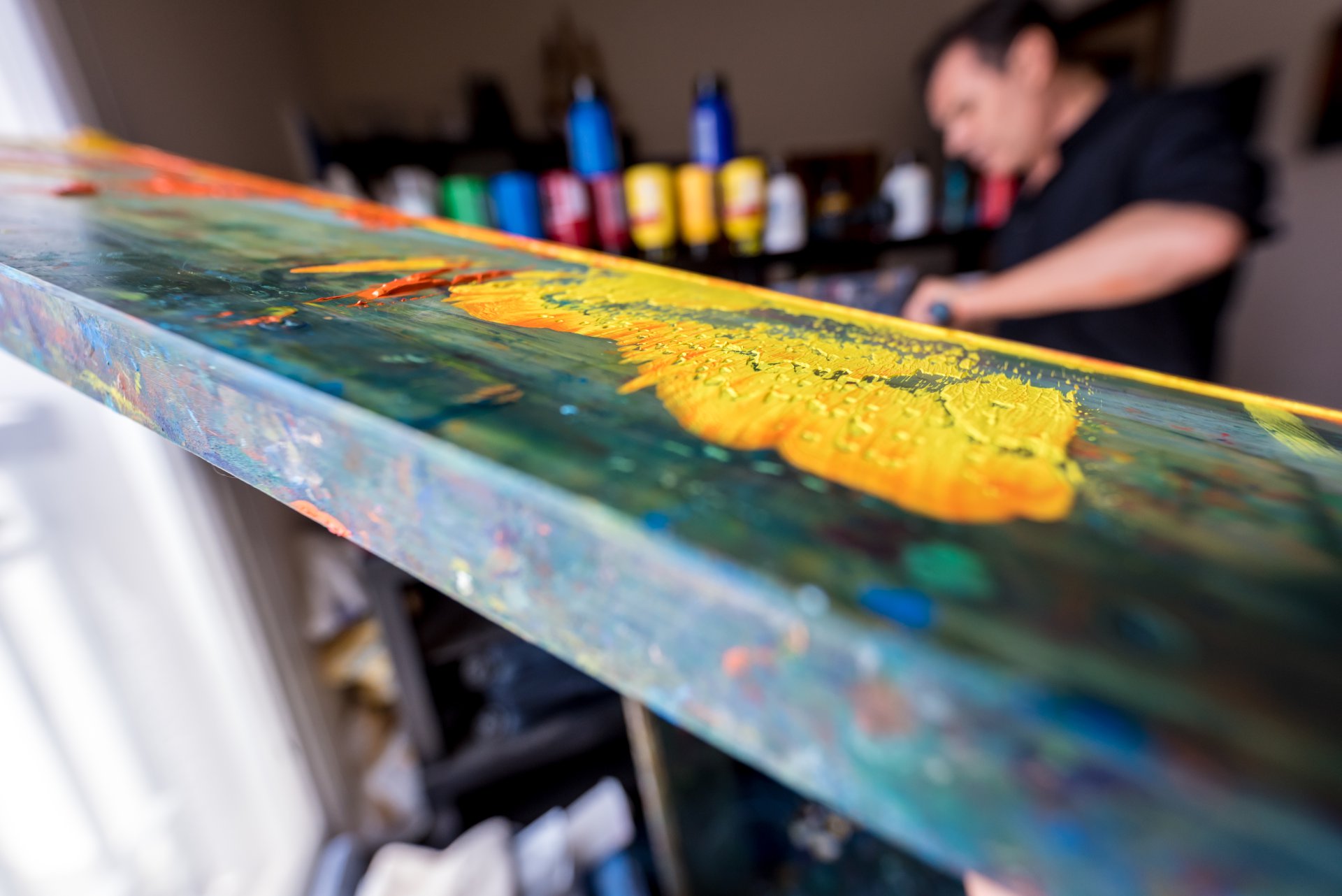 Buy now
Contact the artist
Red blue painting created by overlapping of colors. Used a squeegee and different metal and plastic tools. Acrylic on stretched square canvas,100x100x3,5cm, signed on the back; certificate of authenticity: ready to hang. abstract modern painting on canvas used main colors blue, yellow, red Themes: red, blue, square, wave, waves, living room, richter, colorful, hotel, large, office, orange, abstract, abstract painting Title: "Untitled 1" Acrylic on Canvas
Kemal Yazici, contemporary abstract artist and painter based in Dubai, United Arab Emirates (UAE). Growing up in a village in Germany’s countryside Kemal Yazici’s access to art was limited. His first encounter came in his teens, when a friend showed him his art work. ‘Beautiful paintings on canvas. For me, it had a wow effect,’ he remembers. Art then remained a hobby alongside his professional career. Yazici worked in the engineering industry, later returning to school to gain a degree in architecture. During his studies under the guidance of professor Henner Herrmanns he acquired abstract painting techniques. Again, he was drawn into the world of modern art. A recurring theme in Kemal Yazici’s work is the rhythmic movement of water, inspired by the stunning views from his house on the Bodrum Peninsula on Turkey's southwest coast. He dips into a deep well of rich and vibrant colours to create art that captures the movement of water as it swirls through light and shadow, reflecting the blue skies above. Dubai’s modernity is a big inspiration, too. Kemal Yazici started painting aged 20, when he was working in the metal industry as a locksmith. This was precision work, using only very thin, high quality metals. He worked fast, and always ahead of his target times. Between jobs, there was time to paint. An autodidact, he explored what he liked for himself. Initially Kemal only painted architectural shapes and female nudes. Later free architectural drawings with watercolours. Training as an architect he followed lectures on artists like Van Gogh, Cézanne, Matisse, Klimt, Monet, and was inspired by modernist architects like Mies van der Rohe and Le Corbusier. After his studies, Kemal Yazici invested years building his career as an architect and renovated villas in Bodrum in Turkey, his native country. When he could not find the artwork he and his wife wanted for their own house in Bodrum, he decided to create the canvasses himself. He now spends 80 per cent of his time painting. Passion for art has always been vital in his life. Kemal Yazici has refined his painting techniques, experimenting with different metal and plastic tools such as construction squeegees, to spread acrylic and oil on stretched canvas. The tools allow him to make precise and emotionally free movements. He needs counter pressure, to feel the effect when he applies a lot of paint before scraping it, spreading it or adding more. This expressive and spontaneous application of paint reflects his type of art. Working layer upon layer, with the colours mixing. The process is very physical, and absorbs the artist. Inspired by journeys abroad, Kemal Yazici uses vibrant colours in his art. He travels for business, also for pleasure. He loves Italy and is intrigued by Dubai’s modernity and architecture. His home is in Dubai where he lives with his wife, a doctor. They often visit Bodrum, Turkey’s popular seaside resort. The artist says: ‘The colours ​there are very strong. The sea is very blue. The sky is very blue. The flowers are very colourful. It is a beautiful place.’ Natural settings, dramatic weather conditions, city skylines, the sea, sailing boats and sails inspire him. Several years ago Kemal Yazici discovered the art of Rothko, Gerhard Richter and Karl Otto Götz – abstract expressionists who greatly influenced him. Götz was one of the first to use the squeegee. Rothko fascinates him: ‘His work is almost spiritual, it calms the room, the building, the people. Richter’s paintings are very restless. They bring movement and colour into the room and create a kind of tension in minimalist architecture.’ This now is Kemal Yazici’s own objective: combining his paintings with architecture. For him, the soul is the most important element. ‘My art is an expression of feeling.’