Buy now
Contact the artist
Chamonix / France
What are these colours, forms and shapes that photographer Ingo Robin presents us with in such intensity and force that it is almost blatantly 'visual food'? Which journey does he want to send us on with his strangely drafted scenes of figures against eye-catching backdrops? It is curious how his almost voyeuristic gaze intrigues us and how we want to know more of Ingo Robin's world which is sometimes poetic, sometimes excessive, sometimes greatly reduced.

It seems as if the photographer creates his work like a sculptor or painter who fashions something with his medium, not letting him go but stimulating him evermore. Ingo Robin has been a professional photographer since the early 1990s, characterised by a passion and professionalism that almost leaps out at us. At first he worked on advertising campaigns for labels like Nike, Adidas or Hugo Boss, changing later to magazines such as Max, Vogue, SZ Magazin and later yet too Stern for which he shot fashion pictures and celebrity portraits.

For his own art Robin loves to orchestrate man and nature. His models are not just glossy advertisement and fashion beauties but also artistes like the trapeze and high wire acrobats of the Weisheit family or a group of stilt walkers. He is interested in the often contrasting, sometimes absurd combinations of man and landscape and always intends to catch the special moment in time – when a small band of clowns walks with their instrument cases through the snow of the Swiss mountains or when the red coat of a man waves flamelike in the wind on the imposing Devil's Wall in the German Central Uplands.

Nothing is too far off, no photo Selected works equipment too heavy to realise one of his ideas which he comes up with long before production. For hours his photo team has to climb the rugged rocks of the Norwegian fjords to find just the right spot for the picture of a yeti – a creature with specially designed costume made of shags in garish colours. There is also the image of a clown on an oversized buoy in the North Sea which makes one wonder how he got there. He leans there with an ease and joie de vivre as if dancing in a circus arena and not on slippery steal in the middle of a rough sea. The image on the book cover, however – Robin's interpretation of the iconic band KISS –, plays with the mechanisms of perception, with recognition and memory, leaving room for projections of things heard and felt.

The artist shows great sensitivity for moments of history, mythology or pop culture when interpreting them anew. He confronts his varied subjects without reservations, embarks on open interplay with his protagonists and gives us the impetus to rethink old perspectives and paradigms. He wants to share his enthusiasm with us, he wants the spark to ignite us too. And he manages this in different ways – often by an exuberant blaze of colours, sometimes by intense portraits as well as times and again by provocation, like in his newest series called The Masks. It started during a trip through the US where he accompanied the world-famous DJ Jerôme Isma-Ae with his camera for a documentary, a trip which was later continued in Madagascar. Robin puts the masks of the title, made of plastic and in garish colours, on people's face he comes across, creating images which trigger highly different associations. The pictures talk of fears of an anonymised world, of the global mania to which the individual falls prey, but also of peaceful moments when people without faces but with an intense gaze stare at the camera, yet losing themselves in the vastness of their surroundings. In Robin's imagery two contrasting approaches encounter each other: on the one hand the pictures are highly effective and iconic, on the other they are subtle and critical of society. It is exactly this combination of seemingly incompatible opposites that fascinates and irritates us.

Ingo Robin has found a unique way of uniting things which do not fit, allowing us an iridescent appreciation of the world and triggering a stimulating thought process, while never once losing his colourful and glamorous vein.

Other work of Ingo Robin 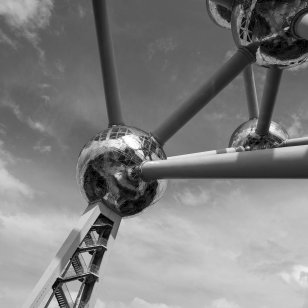 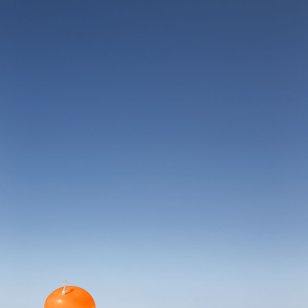